Melasma is a skin condition in which light to dark brown or grey patches of pigmentation develop on the face. It is an acquired hypermelanosis of areas of the skin which are exposed to the sun. The condition is made worse by sun exposure. It is not contagious, cancerous or connected to allergies. Melasma is also known as chloasma and pigmentation of pregnancy or pregnancy mask. 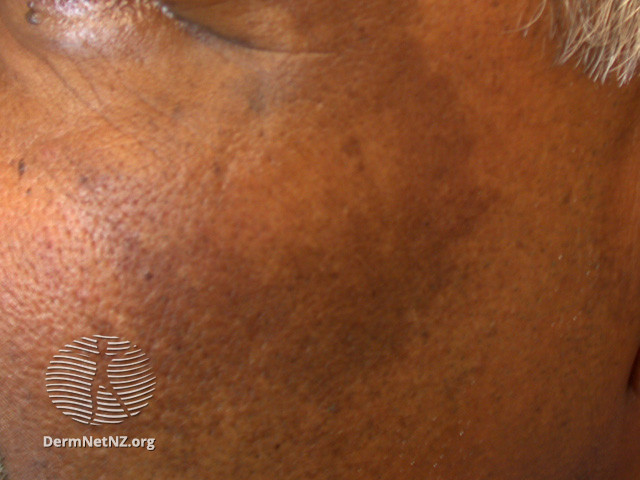 The cause or causes of melasma are not completelyknown. Ultraviolet (UV) light stimulates the pigment producing cells in the skin (called melanocytes) to produce more pigment, but what makes these cells more sensitive to melanocytes in other areas is uncertain. The actual number of melanocytes are not increased, they are just more active in producing more pigment.

Factors which may contribute to melasma include pregnancy, hormonal drug changes, the oral contraceptive pill, and medical conditions affecting other hormone levels such as thyroid conditions (hypothyroidism). Oestrogen is thought to be the main hormone responsible for causing melasma which explains the association with the oral contraceptive pill (when exogenous oestrogen is given to prevent ovulation) and pregnancy, especially the third trimester when oestrogen levels are particularly high. The fact that men can also get melasma, however, means that oestrogen levels are not the only precipitant.

Melasma is usually more noticeable during the summer months and can improve over the winter months, Even clearing completely in early or mild cases only to return next summer. This shows the importance of ultraviolet light in precipitating this condition.

Some investigators believe that actinic (sun) damage to the skin may predispose to melasma. This is because typical features of actinic damage in the skin are often seen in patients who also have melasma. Enlarged and abnormal blood vessels have also been found on biopsies of patients with melasma which are also seen in sun damage.

Who is at risk of Melasma?

Melasma can affect both genders and any race; however, it is much more common in women and people with darker skin types and generally occurs between the age of 20 and 40 years. People with darker skin including Asian, Hispanic, Middle Eastern and Mediterranean tend to be more susceptible to melasma. Melasma is less common in black skin however other causes of hypopigmentation can be seen in this skin type.

What are the symptoms of Melasma?

Melasma is an area of skin which has darker pigmentation (hyperpigmentation) than the surrounding skin, and is typically tan, light brown or dark brown in colour but may also have a greyish hue to the involved area. It is usually found on the cheeks, forehead, upper lip, nose, chin and jaw, with the neck being less commonly involved. The area is flat and not raised, and often symmetrical. When the upper lip is affected many women comment that they look as if they have a moustache. There tends to be periocular sparing and the pigmentation often has a reticulate or lace like pattern to it The excessive pigmentation may be found in either the deeper skin (the dermis), or the superficial layers of the skin (the epidermis) or in both layers of the skin.

These images are kindly provided by DermNetNZ.org for non-commercial use, for the purpose of education and information. The images have not been modified and DermNetNZ do not endorse The London Skin and Hair Clinic. You can find a copy of the license at http://creativecommons.org/licenses/by-nc-nd/3.0/nz/.

How does a Dermatologist diagnose Melasma?

The pattern of melasma is generally quite predictable and so a Dermatologist diagnoses melasma by examining the skin and taking a careful history, and so in most cases this type of hypopigmentation can be distinguished from other causes. Very rarely, a dermatologist may need to take a biopsy to further investigate the hyperpigmentation. A Wood’s light is an important tool for examining a patient with rosacea as it can give some indication as to the depth of the pigment. This in turn helps predicting how well the hypopigmentation will respond to treatment. The deeper pigment in the dermis tends to be inert and encased in macrophages and so is relatively resistant to topical treatment.

How does a Dermatologist treat Melasma?

The main precipitant for melasma is sunlight (UV and visible light) and so the first step in management of melasma is to use a high SPF sunscreen on a daily basis to try to minimise any light penetrating the facial skin. Using a sunscreen which contains physical blockers such as titanium dioxide or zinc oxide is preferable as these ingredients will help protect from visible light. Chemical sunscreens have action against various wavelengths of light and usually do not protect from the wavelengths within the visible spectrum of light. It is therefore advisable to use a sunscreen every morning even if you do not envisage going outside and even in the winter months.

Initially patients may not be too concerned about the hypopigmentation seen in melasma if it is only visible in the summer months and then fades over winter. Ignoring this however is a high risk strategy as it is quite likely that at some point the pigmentation will become more permanent being visible, albeit paler, in the winter months. The old adage that prevention is the best form of cure holds truth melasma as it is reasonably difficult to treat.

Melasma associated with pregnancy often resolves spontaneously postpartum but use of a sunscreen on a strict basis is advised. If however the melasma persists it can then be treated in the same way as other cases of melasma.

In conjunction with using a sunscreen. There are various topical treatments which can help reduce the hypopigmentation. Currently the gold standard for reducing hypopigmentation is topical hydroquinone and in most studies other treatments are compared to either this or a combination of hydroquinone, tretinoin and a corticosteroid combination. Hydroquinone is a prescription item and is usually not used above 4% strength and prolonged use is not advised. It should therefore be used in the short term and to obtain improvement and then ceased followed by a Mason skin care program. Hydroquinone can be used again in the future if required. Using hydroquinone and not protecting your skin from the sun could actually make the melasma worse. The combination of hydroquinone with tretinoin+/-a topical steroid is more efficacious than hydroquinone alone. Both hydroquinone and tretinoin can cause some irritation and so this is why a topical steroid is often included.

Topical vitamin C has also been shown to help even out pigmentation and both this and hydroquinone have a blocking effect on the tyrosinase pathway to reduce melanin production. In addition to this topical vitamin C also has many other beneficial effects on the skin.

20% azelaic acid gel has also been shown to improve the hypopigmentation associated with melasma. Other newer agents such as arbutin, which is a derivative of hydroquinone, Kojic acid and Liquiritin are available in over-the-counter preparations in many countries and so are gaining popularity.

The Obagi Nu-derm system can be an effective coordinated treatment protocol.

Topical treatment is aimed mainly at the epidermal component of melasma as the active ingredients inhibit the production of melanin to some extent. The dermal component that can be present in patients with melasma consists of melanin in macrophages which is inert. This, therefore, does not respond to topical therapy. If patients have been consistent with their treatment regime but have not had a satisfactory result is often due to the presence of a large dermal component with their melasma. After a period of treatment with topical therapy in these cases, laser treatment can then be considered. Over the years many different laser sources have been used to treat melasma with varying response. Currently used laser modalities for melasma include low fluence Nd-YAG laser treatment which is known as ‘laser toning’and non-abblative fractionated resurfacing. There is also now interest in using laser wavelengths in the vascular spectrum as it has been found that many patients with melasma have vascular abnormalities within the skin and the hypopigmented areas. Before embarking on any laser treatment however patient should be primed with topical therapy to prevent any worsening of the melasma or post inflammatory hyperpigmentation.

Chemical peeling has been used for the treatment of melasma with the most common agents used to being glycolic acid or salicylic acid. Results to treatment tend to be variable and temporary and should always be combined with skin lightening agents to prevent worsening of the hypopigmentation.

Tranexamic acid, which is an anti-fibrinolytic agent, taken orally has also been used in the treatment of melisma. To date, responses to treatment in clinical trials are conflicting and so more investigation is needed with this agent.

If melasma is not responsive to treatment then the use of camouflage make-up can be useful in disguising the hypopigmentation. This also works as a good barrier between the skin and UV and visible light. Use a dedicated sunscreen however would also be recommended in addition.

This website uses cookies to improve your experience while you navigate through the website. Out of these, the cookies that are categorized as necessary are stored on your browser as they are essential for the working of basic functionalities of the website. We also use third-party cookies that help us analyze and understand how you use this website. These cookies will be stored in your browser only with your consent. You also have the option to opt-out of these cookies. But opting out of some of these cookies may affect your browsing experience.
Necessary Always Enabled
Necessary cookies are absolutely essential for the website to function properly. These cookies ensure basic functionalities and security features of the website, anonymously.
Functional
Functional cookies help to perform certain functionalities like sharing the content of the website on social media platforms, collect feedbacks, and other third-party features.
Performance
Performance cookies are used to understand and analyze the key performance indexes of the website which helps in delivering a better user experience for the visitors.
Analytics
Analytical cookies are used to understand how visitors interact with the website. These cookies help provide information on metrics the number of visitors, bounce rate, traffic source, etc.
Advertisement
Advertisement cookies are used to provide visitors with relevant ads and marketing campaigns. These cookies track visitors across websites and collect information to provide customized ads.
Others
Other uncategorized cookies are those that are being analyzed and have not been classified into a category as yet.
SAVE & ACCEPT
Scroll to Top